It was so special to look back on your fourth year that I wanted to take some time to talk about your fifth year. You’re FIVE. That seems so much bigger than four.

Last year, I said I thought it would be a big year with some big stuff. As I was writing that, we were praying about a big move and another baby. This year, we have a yes for both, and I love how you are processing both with such maturity. You are so excited about the new baby, and you ask so many questions and want to give her hugs and kisses. You understand the move is both exciting and sad.

I want to make sure that in the many transitions of the next year that we still have special time together. For you, this usually involves some kind of snack. 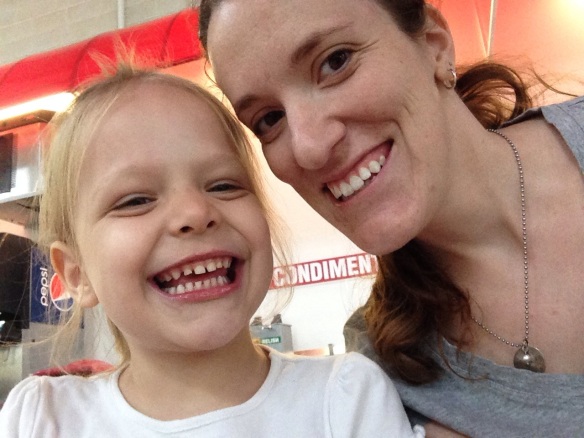 Your relationship with Violet is very different this year. You play together – sometimes nicely, sometimes not; she follows you around and repeats what you say. You are so protective of her, and you completely freak out when she gets hurt. And you are a very bossy big sister.

A bossy big sister who struggles to control her tongue… This sounds so familiar… ME. Sigh.

I cannot even imagine what the next year holds, so many changes ahead. But I know you’ll be giggling and interrogating everyone we meet and making PBJs for Violet and thinking about so many things. 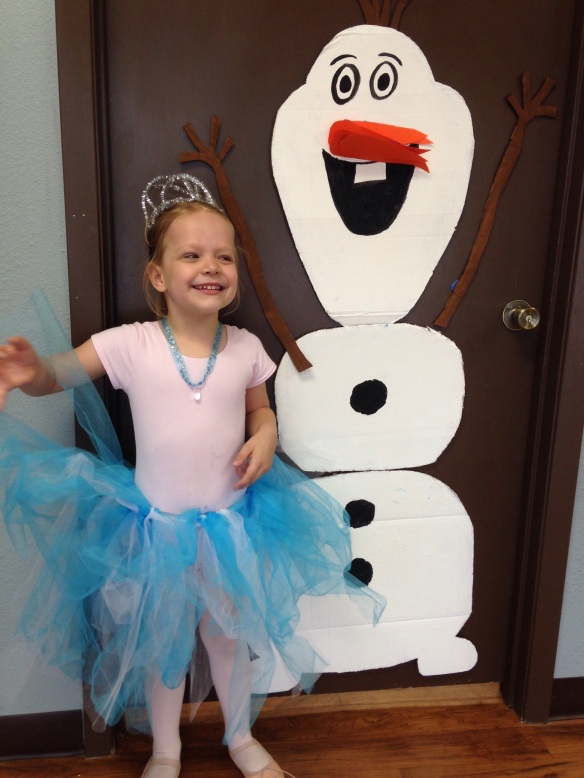 To update quickly… We’re moving to Kansas City! We’ve been praying about this move for over a year, and to see it happening is a little surreal. Right now we’re in the rough transition phase of moving, some things ending, and new things beginning.

One thing that just started is Brett’s new job. He is currently in Kansas City jumping in as the IT guy at a tech startup. It’s been an exciting week for him so far. I’m on the other end making the new budget, not quite as exciting. It’s gotten me thinking about jobs and money and priorities.

I’ve always wanted to be a stay-at-home mom, and we are so thankful that Brett has been given jobs that enable me to maintain that position. So we live on one income which involves making a budget, making priorities and sometimes saying “no” to ourselves and our kids.

Saying “no” isn’t very popular and is sometimes misunderstood. As we’re creating a new budget and revisiting some items, it’s an opportunity to reevaluate some of our priorities. When it comes to money, different families choose to put it in different places.

For example, we haven’t had cable TV in four years, and we haven’t missed it at all. For some families, this is a big deal, and that’s fine for them, but we’d rather spend our money on other things. This doesn’t mean we have some kind of financial hardship, it just means we have different priorities for allocating our money, though this gets misunderstood.

I’ll use my friend Meghan as an example (with her permission). Meghan does not own a Crock Pot. Yes, I couldn’t believe it, either. Somehow she creates delicious, healthy, home cooked meals for her family without a Crock Pot. This seems unbelievable, I mean, I have TWO. So I could get concerned, “Poor Meghan, she can’t afford a slow cooker. She must be experiencing financial struggles since she isn’t spending her money the same way I would.”

In reality, Meghan doesn’t want a Crock Pot. She wants to be minimal with her kitchen appliances and is doing just fine without one.

This is a small and maybe silly example, but sometimes “no’s” are preferential and not a sign of right and wrong or rich and poor. The things we spend our money on may be different than you or someone else, but for us it’s largely based on personal priorities.

Sometimes “no” isn’t a sign of money trouble, it’s a sign of wise budgeting and avoiding money trouble. The country is in a debt crisis because of people refusing to make financial priorities and say “no” once in a while.

We have a new budget in Kansas City. Mostly the same, still no cable and no budget to replace our furniture and wardrobes every two years, but we don’t care. We’re excited to add that we’re sponsoring a preschool student in the Dominican Republic and being more intentional about saving for family trips. And someday we’d love to put a deck on the house.

So that’s what we do with one income. Some moms make money off their blogs, but clearly I don’t have the time or drive to make that happen, haha. ;) Since this is the first post in three months? I’ll try to be more regular as we have many changes in the next few months.

And posts without pictures are boring, right? I tried to find a picture that related to money and the new house… So here’s a peek into our future kitchen with me writing a big check. :) 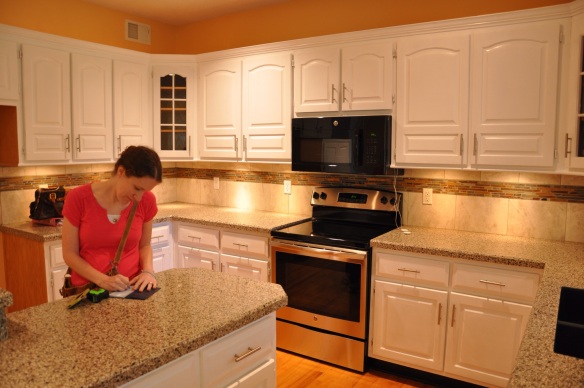 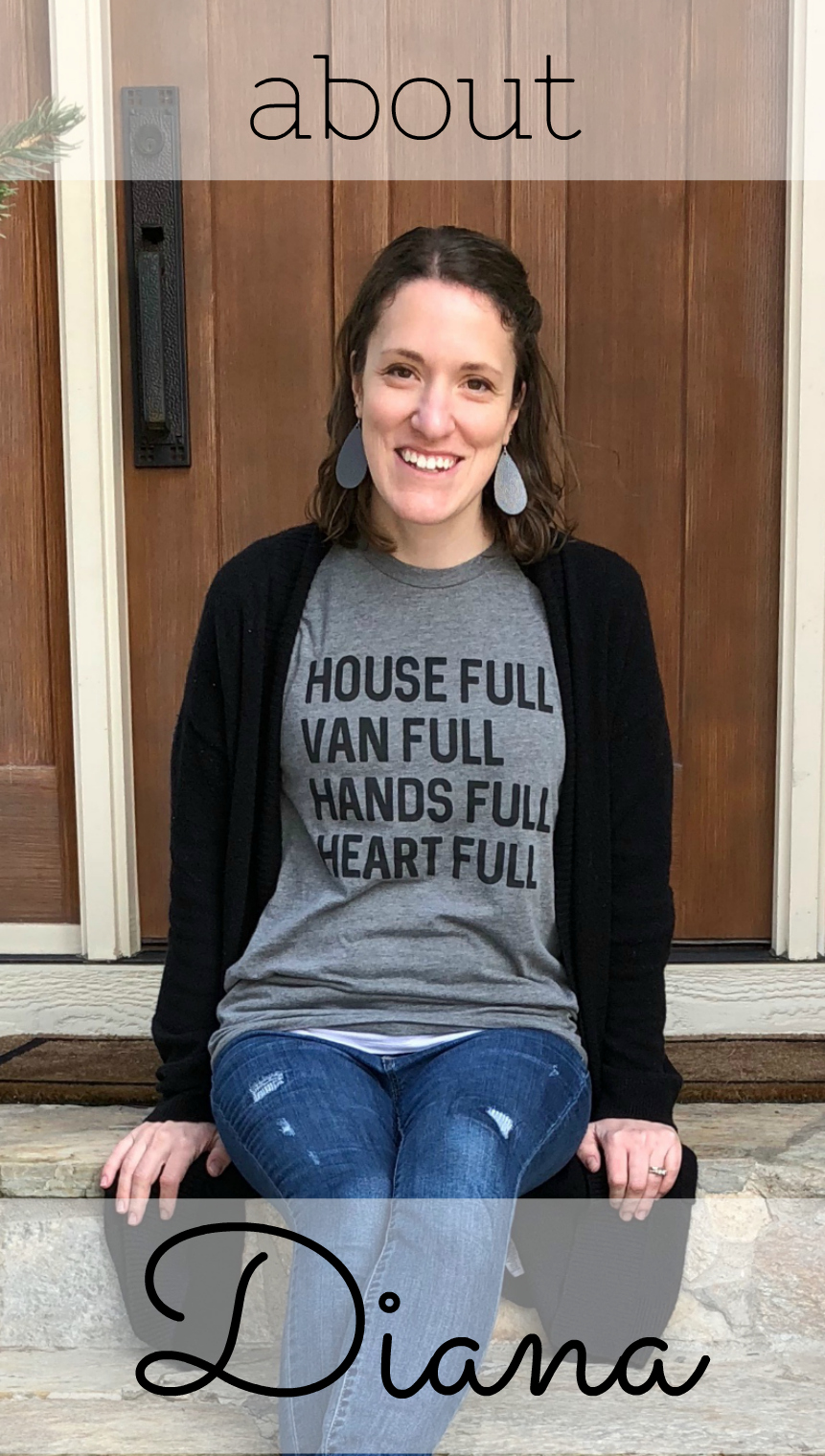