Brett has been a little under the weather lately, and he found out today he probably has a kidney stone.  In an attempt to help him feel better, I changed dinner plans to include the classic comfort food of chicken noodle soup.  With an Asian twist.

I subscribe to several recipe email lists, and one that’s a little different is from Eat Better America.  They take “normal” recipes and tweak them with healthy alternatives.  A recipe from them that grabbed my eye one day was the Ginger Chicken Noodle Soup, and we enjoyed trying it last winter.  As I was contemplating chicken soup for this evening, I immediately thought of this recipe.  But no last-minute trips to the store for me – with some changes I was able to use things I already had on hand.  As called for in the recipe, I already had chicken stock, carrots, fresh ginger, soy sauce (tamari, actually), vinegar, peas, and buckwheat noodles.  I did not have any chicken because I used up my frozen supply making another batch of chicken nuggets with Meghan yesterday.  Luckily, I had more buckwheat noodles than the recipe called for, so I tripled the noodles to compensate for the missing chicken (though honestly we didn’t miss it).  I also added some celery, garlic, and onions I had lying around.

Brett said that just smelling it made him feel better.  Someone else was enticed by the smell. 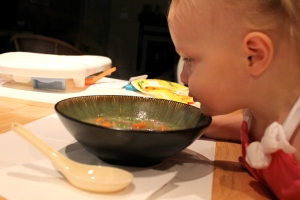 She also tried to steal my carrots.  I made a bowl for her without broth so that she could eat it herself with less mess.  She ate the carrots first, then the celery and noodles, leaving most of the peas.

I was going for comfort food, and Brett declared it a success.  Ginger is often recommended for upset stomachs, and this article even promotes buckwheat as a good for kidneys.  And the way I made it, this recipe is also “safe” for those following a gluten-free diet:  substituting tamari for soy sauce and using gluten-free buckwheat soba noodles, just check if your chicken stock is gluten-free.  And it’s all healthful and tasty – score!

What did you have for dinner tonight?