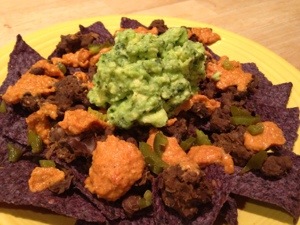 I miss cheese. Really so much. Several of my vegan friends have posted recipes for vegan “nacho cheese,” and I decided to give it a shot. Nachos are just fun food, so I was excited to put them on the menu.
I had Brett guess the ingredients of the nacho sauce, and he was pretty stumped. I followed the recipe from New Nostalgia, but all the recipes floating around have the same basic ingredients of cashews, nutritional yeast, sun-dried tomatoes and non-dairy milk. Pretty weird, huh? I’m not sure how she got it such a creamy texture; I food-processored the heck out of it and couldn’t get it to look like hers. I even soaked the cashews, oh well.
The verdict? Tasty! If you make this, don’t expect it to taste like cheese. It doesn’t (and it doesn’t taste like nuts, either). But it is a flavorful, creamy-ish nacho topping. Great with blue corn tortilla chips, homemade guacamole, refried black beans and jalapeños. That’s a vegan/plant-based meal I think anyone would like.